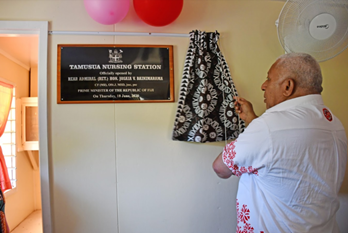 More than 200 Fijians in three villages in the Yasawa group will now no longer have to travel for more than half an hour by boat to seek medical assistance after the opening of their new nursing station.

Speaking at the event in Tamusua village on 18th June 2020, Yasawa Prime Minister Frank Bainimarama highlighted that the $300,000 project will have an immediate impact on the health of the communities it serves –– some 258 people from the villages of Tamusua, Nabukeru, Navutoa, and the children of the nearby primary school.

The Prime Minister stressed that the villagers could and should now take ownership over their health and wellbeing by taking full advantage of the services available.

This event came about because of the inspiration of Past RCOH President, Greg Wragg PHF OAM who was well known for his support of Fiji, having instigated several Rotary Projects in Fiji over many years. Greg had a great passion for the Northern Yasawa Islands which are very remote from the mainland.

In 2011 Greg had the idea of creating a project for the construction of a Nursing Station at Tamusua/Nambukeru, gained the support from the Government and, with the support of a number of Rotary Clubs and a District grant, raised approximately $35,000 towards the cost.

The event also saw the commissioning of a new solar freezer, new canteen for the Tamusua women’s group including a new boat for the Kese nursing station.